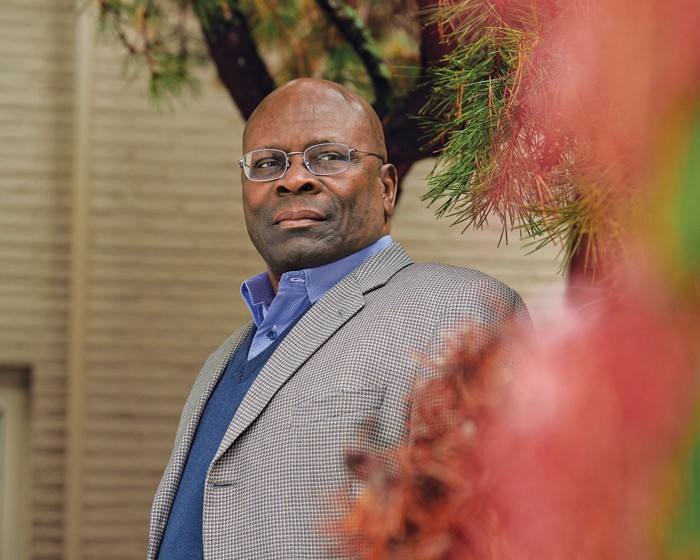 His semiconducting polymers, found in displays and solar cells, emerged from decades of careful engineering

In polymer science, it pays to be persistent. University of Washington chemical engineer Samson A. Jenekhe has dedicated decades of research in the lab to understanding and optimizing the properties of semiconducting polymers. In recent years, this persistence has paid off, with some of his work leading to advances that enabled new consumer products—including the glowing screen you might be holding in your hand right now.

Some of Jenehke’s work has contributed to the development of low-power, high-brightness organic light-emitting diodes (OLEDs). Now nearly ubiquitous in smartphone and TV screens, this technology struggled to make it out of the lab because researchers could not figure out how to achieve sufficient brightness (quantum yield) from conductive molecules or from polymers that glow when conducting an electrical current. In 1994, Jenekhe showed it was possible to produce light-emitting organic materials with high quantum yields by introducing buffer molecules that prevent the conducting molecules from ordering themselves in a way that quenched their luminescence. That work set a foundation for the development of OLED materials—whether based on polymers or small molecules—with efficiencies suitable for commercial applications.

“It’s been very thrilling to see the commercialization of OLEDs and to know we had a small part to play,” says Jenekhe, who holds more than two dozen patents related to his work on semiconducting polymers.

Jenekhe has also made major contributions to the advancement of polymer solar cell materials. Organic solar cells have historically been made with expensive fullerene molecules that help transfer charges within the devices. However, the absorption properties of fullerene molecules are difficult to tune, which limits the performance of devices made with them. Jenekhe’s lab pioneered the synthesis of organic nonfullerene acceptors, which are more thermally stable. Polymer photovoltaics containing nonfullerene acceptors have recently shown photon-conversion efficiencies as high as 18%, Jenekhe says. For comparison, commercial silicon-based solar cells convert about 25% of the energy in sunlight into electricity. “Getting organic devices that close to silicon is quite remarkable,” he says.

Jenekhe’s wide-ranging work on semiconducting polymers has not only enabled new consumer products but has also been celebrated by his scientific colleagues. He is the 2021 recipient of the American Physical Society’s Polymer Physics Prize “for pioneering and sustained” contributions to the synthesis, physics, and characterization of semiconductor polymers.

This honor is well deserved, says the University of Chicago’s Matthew Tirrell, who was Jenekhe’s PhD thesis co-adviser. “Sam is among a handful of leaders who have rapidly advanced the field of electroactive conducting materials in the last 3 decades,” he says.

Jenekhe is not resting on his laurels. He is continuing to develop more efficient and durable conductive polymers that may be integrated into less expensive manufacturing processes, potentially reducing OLEDs’ cost. His lab works primarily with benzene rings and conjugated polymers, which have backbones with alternating single and double bonds; such molecular structures yield a cloud of delocalized electrons with semiconducting properties. Because of their relatively low efficiency, these materials lag behind small-molecule light emitters in commercial applications. Over time, Jenekhe predicts, conjugated polymers will become the preferred material “because you can process them from solution, which is a lot cheaper.”

Another exciting application of conjugated polymers, Jenekhe says, is in organic thin-film transistors (TFTs) for flexible electronics. Such materials could be woven into clothing or embedded into any other flexible material or surface. His lab was among the first to develop polymer TFTs that are durable and stable over several years under ambient conditions.

Jenekhe, a native of Nigeria, credits some of his success, and his early fascination with science, to his “biggest intellectual mentor,” his maternal grandmother, who was known as the local village doctor. “She would take me on trips during school breaks, and I would watch her use various medicinal plants to help people get healed,” he says.

After more than 3 decades as a leading research scientist, Jenekhe has come to embrace his own role as a mentor. He says he is keenly aware of the loneliness and isolation of being Black in science and engineering. He makes sure to encourage his Black and female students to “set goals for yourself and work very hard to achieve them, no matter what obstacles stand in your way.”

However, he says, it’s also important for society to broaden access to education to underrepresented groups, especially those with lower means. “You don’t know who is going to grow up to be the inventor of a major new drug or a new way of doing computing.”