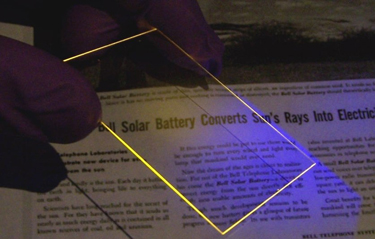 When it comes to solar energy research it’s better not to be self-absorbed according to researchers at the University of Washington and Western Washington University.

Researchers at UW’s Clean Energy Institute have developed a luminescent solar concentrator that absorbs light over a large area then re-emits it. The concentrator directs light to photovoltaic cells on the edge of the glass layer, which is then converted into electricity. The process, which eliminates so-called self-absorbson, or the tendency of the luminescent dyes to absorb their own light, is known as “doping” quantum dots. It could lead to a system of solar panels and window coatings ideal for cloudier climates.

Meantime, this joint research between the two universities was demonstrated by a student team from Western Washington University, which took the $5,000 Clean Tech Prize and the $5,000 second place prize at the recent UW Environmental Innovation Challenge. The Nova Solar Window team is pictured here with  Alex Jen, CEI Chief Scientist for Science & Technology Integration. Read more