Draw a Circuit: Fun with Graphite 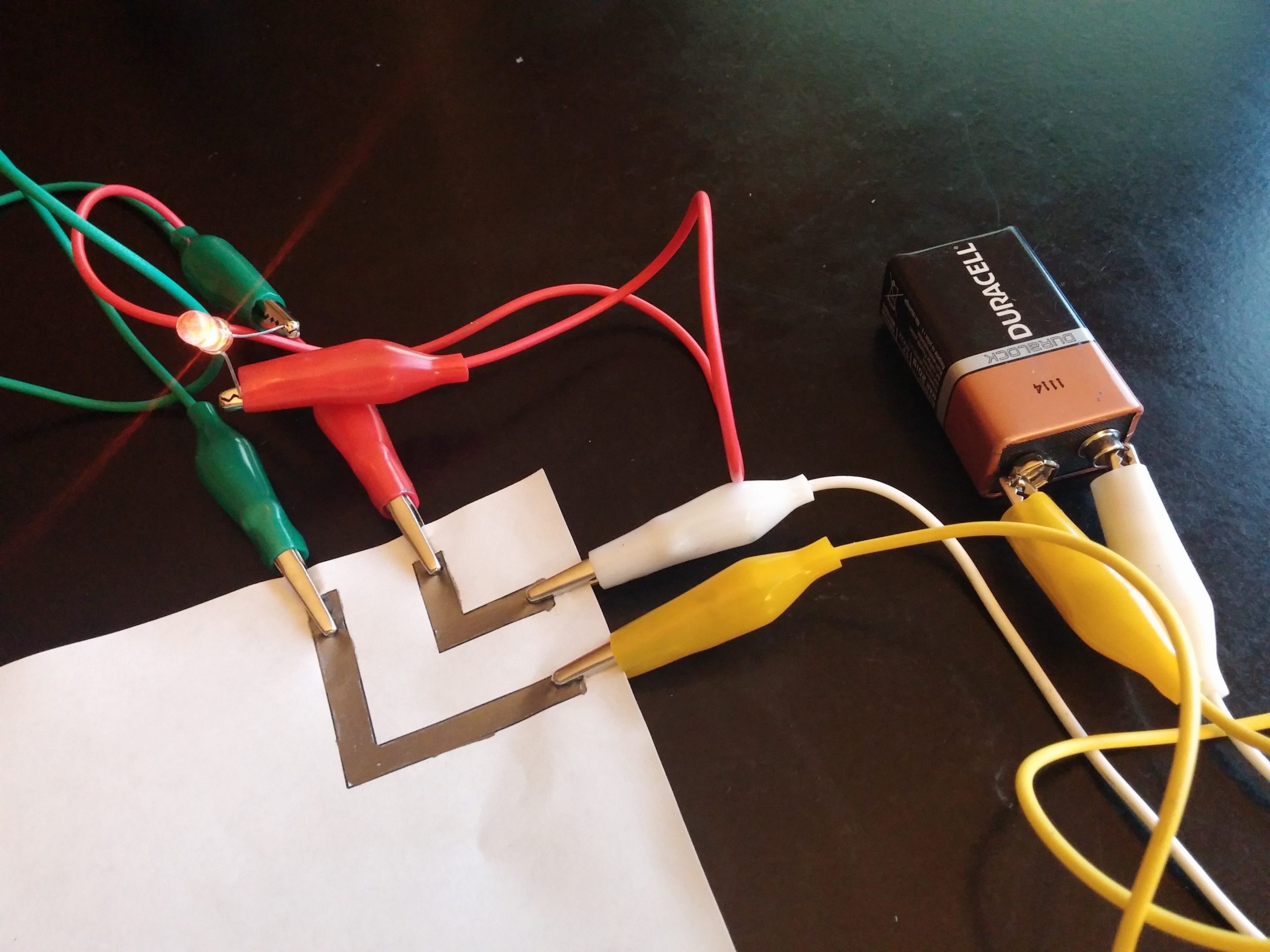 Students explore the conductive properties of graphite and graphene as they create simple circuits.

What we call “pencil lead” is actually a substance called graphite, which consists of many stacked sheets of carbon atoms. Like a metal, graphite is conductive and therefore can act like a wire on paper to create the circuit. Each sheet of carbon atoms is bonded in honeycomb structure and the single layers are known as graphene (see picture on front page or toy model; also if available, look under microscope at a real graphene flake!). These layers are very weakly bonded to one another, which allows them to easily slip past each other. Slide your finger along the box you drew; this is why it feels slippery! Resistance can be measured with a multimeter. The unit of resistance is the ohm. Resistance increases with the length of the conductor.

Scientists and engineers have recently been able to extract single two-dimensional (2D) layers of graphite (graphene) and study its extraordinary properties. In addition, we’ve now learned that there are many other layered materials that can be thinned down to the 2D sheets, only a few atoms thick. Researchers at MEMC are creating 2D materials in addition to graphite which have special properties at the nano-scale which could be used for energy efficient electronics, and batteries. There are 2D metals, insulators, semiconductors, superconductors, magnetic materials, ferroelectric materials, and more, all of which can be re-stacked in any combination like Legos!

Explain: The LED should light up in one direction, but not the other. This is an important characteristic of a light-emitting diode; current must flow in a particular direction to get light production. In this case, current flows into the long LED wire and out the short one. If the LED does not light with the battery in either direction, the LED is likely burnt out, so try a new one.

Explain: Nothing should happen! This is another very important property of an LED. There is a minimum voltage required to conduct electricity, which in this case is ~1.8 V, greater than the voltage of the single AA battery. Explain: A complete circuit includes an energy source and a load that are connected by wires arranged in a circle.

Explain: When you erased through the box, you effectively cut the graphite wire and current no longer had a path to flow through the circuit, so the LED turned off. In order to get the LED to light up, we need a sufficient amount of current to flow through it. In addition, higher current will increase the LED brightness. With the lower voltage of the AA batteries, less current flows through the LED and thus the brightness decreases.

Explain: As you should have noticed, the brightness of the LED increased after filling in the solid lines. This is because the resistance of the graphite drawing decreases with increasing surface area, allowing more current to flow through the circuit.

Try making conductive paint by mixing powdered graphic with clear acrylic paint as a binder. You can also purchase wire glue that is used for making non-soldered electrical connection.