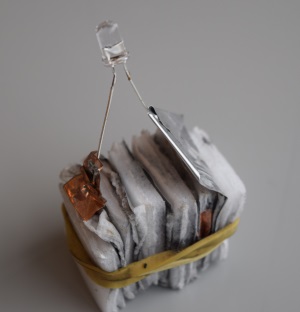 Storing energy is one of the biggest challenges facing the scaling up of clean energy technologies.  The goal of this activity is to allow students to design and build a battery using their understanding of oxidation and reduction reactions. Students will use everyday materials, including aluminum foil, salt water, charcoal, and copper foil, to build a non-rechargeable battery cell capable of powering an LED. Students should be familiar with balancing equations using half-reactions.

Can energy be captured and stored?

How can we capture the energy released from a chemical reaction to produce useful electrical power?

Batteries store chemical potential energy which can be released to produce electrical energy, or electricity. Depending on the specific electrochemical reaction that takes place inside batteries, batteries may be either single-use (primary cell) or rechargeable (secondary cell). For example, cell phone batteries are rechargeable (e.g., we have to plug our phones in each night), however the batteries we put into our TV remotes and flashlights could be rechargeable and single use. In this experiment, we will learn about one kind of single-use battery, an aluminum air battery.

Aluminum air batteries use aluminum metal and the oxygen in the atmosphere as their electrodes. Aluminum air batteries offer one of the highest energy densities of all batteries because the weight of air is very light compared to other types of battery electrode materials. Energy densities are the amount of total energy output by a battery divided by the battery weight or the battery volume in units of Watt-hour/kilogram or Watt-hour/Liter. Energy densities are often used to evaluate the performance of a battery. Another set performance matrix that is commonly used together with energy densities is power densities, which is the amount of energy densities available every second of time (in units of Watt/kilogram and Watt/Liter). Aluminum air batteries are part of a larger category of batteries, metal air electrochemical batteries, wherein the pure metal forms the anode and the external air is the cathode. The batteries use the oxidation of aluminum at the anode and the reduction of oxygen at the cathode to form a galvanic cell. A galvanic cell generates electrical currents via spontaneous redox reactions in the cell. The aluminum air battery is a primary cell because the cell ingredients are consumed and the battery therefore cannot be recharged. The aluminum metal, Al, is completely reacted to produce aluminum hydroxide, Al(OH)3. The oxygen, O2, from air is reduced to produce hydroxide ions, OH–. Copper is used to collect the electrical current and is not consumed in the reaction. Crushed charcoal acts as a catalyst and greatly increases the surface area where the reactions can occur. The salt water solution is an electrolyte which carries the charged ions from one electrode to the other. The reaction rate can be increased by adding additional hydroxide ions using baking soda (NaHCO3) or strong base (NaOH or KOH).

(The reaction improves if it is done in a basic solution that supplies excess OH– ions. With potassium hydroxide electrolyte the 1.2 volts is produced with salt .7 volts per cell. Be very cautious if experimenting with KOH or NaOH electrolytes, use gloves and eye protection)

When a full circuit is formed with the aluminum air battery as shown in Figure 1 below, the redox reaction spontaneously begins due to the chemical potential difference between the two electrodes and forces the battery to discharge. Here the aluminum electrode is the anode of the cell since it hosts the oxidation half-reaction. Likewise, the air electrode is the cathode because it undergoes the reduction half reaction. During discharge, the electrons produced at the aluminum anode flow in the external circuit and power the load to which the circuit connects (see the purple solid arrows in Figure 1). A load in an electrical circuit is a component that consumes energy such as a lightbulb, a charging cell phone, or a working electric fan. At the same time, the negative OH− ions released by the air cathode travel across the liquid electrolyte and arrive at the aluminum anode to serve as reactants for the oxidation half-reaction (see the purple dashed arrow in Figure 1). The cycling of electrons and charged ions drives electric currents in the circuit, which powers the load in the circuit. Notably, when being charged, the flow of the electrons and OH− ions will be in the reversed direction of Figure 1.

In this lab, the students will learn how to build a structure which enables this electrochemical reaction to occur. Use one or more of the following questions with students to help them debrief the activity and demonstrate what they have learned.